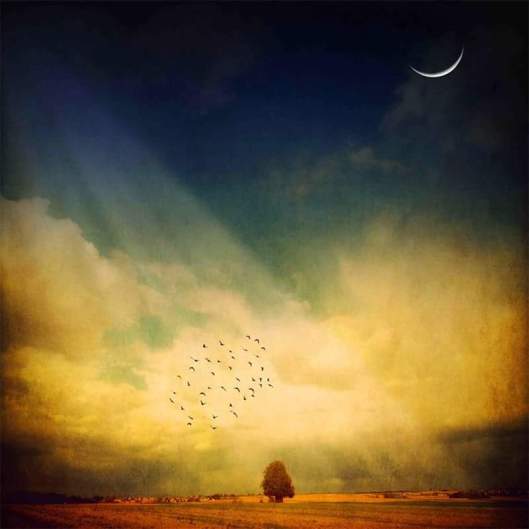 Song of the Rolling Earth

Were you thinking that those were the words,

No, those are not the words,

The substantial words are in the ground and sea,

“The workmanship of souls is by those inaudible words of the earth,

Say on, sayers! Sing on, singers! Delve! mould! Pile the words of the earth! Work on, age after age, nothing is to be lost, It may have to wait long, but it will certainly come in use, When the materials are prepared and ready, The architects shall appear.

~ Excerpts from “Song of Myself” by Walt Whitman

We are always in conversation with the “rolling earth,” not only through our five senses but also through dreams, visions, meaningful coincidence, and other intuitive ways of knowing. When these conversations break into consciousness through  an event of synchronicity, for instance, we tend to experience a sudden shift in perception from rational understanding to symbolic knowing. This shift stretches our thinking, enlarging it beyond the boundaries of a strictly materialistic view of the world.

It was through a dream, followed by a series of meaningful coincidences that I was first led to Taos, New Mexico. It was in Taos that I became aware of the Power that a particular place can hold for an individual. I shared that story in a blog post here, published November 8, 2013, and titled “The Healing Power of Place.” I knew that I had been called to Taos through that dream and the meaningful events that followed. Once there, I found that I was standing, as the dream foretold, on Holy Ground. In light of my prior naivete of any such concept, I believe that the spirit of that place sought me rather than the other way around.

Recently, after seeing the photographic depiction, “Echo of a Sigh,” by Philippe Sainte Laudy, paired with the Walt Whitman excerpt (above) that I originally shared on social media, my friend, Flaherty Ba, felt led to comment ~

“[What a synchronicity!] I had a dream that I was not paying attention and suddenly realized my deceased mother was talking to me on the phone. I said, “Mama, I missed what you said. Say it again, please.” But she was gone and I woke up. Two days later I had another dream that she was standing next to me and pointing at a light coming from the earth as if it were urgent that I saw the light. It was a similar light to that in the picture [you posted] – warm but intense and bright as well. I have been thinking of it for days now. The light and the quote from Whitman come together for me in a strange way. I have a poem that uses some of these lines – but your quote completes his lines – lines I had forgotten. When I read them I knew that was what [my mother] was saying, but I still don’t know the meaning – but the meaning is there. I was shocked by his concluding words [in the quote you shared]. Here is the poem I wrote:”

I spent last night with Walt Whitman.
That man could make love to all
the parts of me simultaneously.
I did not know if I was the Mississippi River
or the Yukon delta, but I was fluid motion
when he sang his song. I moved my hips
and he saw a thousand generations
of peoples of many nations springing from my thighs.
He said the voices in me were the ravings
of the unheard dead muttering from their graves
on battlefields, in sanctuaries, from river bottoms
and those cast into the sea or dead of influenza in 1827.

He said that life was forcing its green way through me
and out of my belly – which he kissed with much delight –
out of my belly would spring oak trees great enough
to make the druids dance again.
He suckled on the majesty of mountains,
found valleys deep with undergrowth.
My eyes were Promethean fires to light a world gone dim.
My hands were the blacksmith’s and the artist’s.
I was called to the forge. We rolled in a ball of fire
that even his great ocean could not smother,
yet we flowed with the tides of our bodies
into the soul of one another.

Now I am the Mississippi River, the Yukon delta,
the fluid motion of fire. I am the voice
of this dumb earth, and for her I sing and for you.
The call of wild geese bursts in my throat.
Mountains push through my soil.
Voices long dead speak through me
and those yet to be born.
Our cells interpenetrate.
Nothing can separate us now.

I must praise. I must sing of you,
kneel before you, wash your feet with my tears.
All praise. All praise. You are the one who saves.
Creatures shimmering with the sound of light,
you are made of the stars. Shine. Shine. Shine.
Sing on, singers. Nothing is to be lost. ~ Flaherty Ba

Flaherty concluded in her comments-after thinking about the Whitman passage and how it connected with her own poetry-that part of the message of the dream mother was to continue to speak for the earth through her writing. I believe that everyone who reads her poem above would certainly agree!

As you might imagine, the power and beauty of Flaherty’s poem, as well as the meaningful exchange between her and me, shifted both our perspectives from mundane to spirit-filled. The idea that I had been intuitively led to pair that exact picture with that exact Whitman quote, both matching so perfectly with my friend’s dream imagery and magnificent poem, still astounds us both. Even after 10 years of journaling events of synchronicity, when this type of numinous experience happens in my life, I feel the magic and my connection to something bigger, something beyond my personal ego desires and perspectives.

Because of this, I know that…

“Where I sit is holy,
Holy is the ground.
Forest, mountain, river,
Listen to the sound.
Great Spirit circles
all around me…” – Native American chant
Ciao,

4 thoughts on “In Praise of Holy Ground”

Meditations on Art and Life