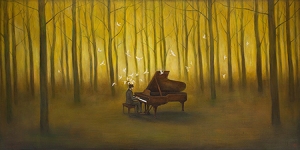 I’ve recently begun writing and volunteer copy-editing for a peer-reviewed journal by the name of “Coreopsis: Journal of Myth and Theater,” published by The Society for Ritual Arts (SRA). A few weeks ago, the journal’s senior editor asked if I would be interested in meeting with her to discuss my conducting an interview for the Fall/Winter 2015 Edition with an outstanding (Yes! I’ve listened to their music) musical team, Sharon Knight and Winter.  Sharon and Winter are being honored this year by SRA’s first-ever Lost Chord Award. Before the meeting, I realized that I first needed to research the concept of the “Lost Chord,” so I could come to the meeting with at least an inkling of what we were going to be talking about.

During my search (Google), I discovered that there had been an organization in New England called The Lost Chord, which was committed to “a collaborative effort to nurture young talent […] and to foster a commitment to music and arts education accessibility…” That made sense in light of SRA’s similar commitments. I also discovered that The Lost Chord organization took its name from a song written in 1877 by Arthur Sullivan (of Gilbert and Sullivan fame).

I know this will be hard to understand for you fans of Sullivan (The Lost Chord was wildly popular and one of the first recordings of music made for the then newly invented phonograph) and for fans of the Moody Blues’ album “In Search of the Lost Chord,” but I was completely unfamiliar with the phrase. While my good friend the Internet gave me the initial information I needed, a cluster of synchronicities over the next several days filled-in the rest of the Lost Chord meaning for me.

I was touched by the fact that Sullivan wrote the music to the Lost Chord at his terminally ill brother’s bedside. The words to the music, based on a poem by Adelaide Ann Proctor, begins…

“Seated one day at the organ, I was weary and ill at ease,
And my fingers wander’d idly over the noisy keys;
I knew not what I was playing, or what I was dreaming then,
But I struck one chord of music like the sound of a great Amen…”

The song goes on to express how the “[sound] lay on my fever’d spirit with a touch of infinite calm,” and how frustrating it was to the artist that it could not be reproduced again by personal means, “I have sought, but I seek it vainly, that one lost chord divine/Which came from the soul of the organ and enter’d into mine.”

The lyrics end with the words, “It may be that Death’s bright Angel will speak in that chord again; It may be that only in Heav’n I shall hear that grand Amen!”

I felt a connection between song’s inspiration (a dying loved one) and my own plans that afternoon to visit a friend in San Francisco at the Hospice house where he was being given palliative care. A talented poet and lover of music, my friend had been witnessing about the importance of music and its ability to add meaning and balm to his soul in his last days. Because of this, I read the lyrics to Sullivan’s “The Lost Chord” to him during our Hospice visit. The reading proved to be providential and brought tears of sadness and recognition as well as joy to our friend and to all present at his bedside that day.

The next day, a Facebook buddy, unaware of my own interest in the matter, posted: “North and I are off now in search of the Lost Chord ~ Ommmm,” before he went trekking in the Canadian wilderness with his dog North. I found this to be a meaningful coincidence since I hadn’t been aware of the existence of “Lost Chord” before the prior day’s events. However, I didn’t exactly know how Greg’s FB announcement tied in with meaning around the transcendent experience of music.

It wasn’t long before I discovered the Moody Blues album, “In Search of the Lost Chord,” and knew exactly to what Greg had been referring: the ineffable vibration of  Life in all its Beauty that connects us all in our longing for more.

I am including only two contributing parts to “In Search of the Lost Chord” here, those that are relevant to this blog post:

Be it sight, sound, smell, or touch,

There’s something inside that we need so much.

The sight of a touch, or the scent of a sound,

Or the strength of an oak, with roots deep in the ground.

The wonder of flowers, to be covered, and then to burst up,

Through the tarmac, to the sun again, or to fly to the sun,

Without burning a wing, to lie in a meadow,

And hear the grass sing. To have all these things,

In our memories hoard, and to use them,

To help us, to find the Lost Chord…

The rain is on the roof,
Hurry high, a butterfly.
As clouds roll past my head,
I know why the skies all cry,

The Earth turns slowly round,
Far away, the distant sound.
Is with us everyday,
Can you hear, what it says,

As I thought about the meaning of the songs and what all of these events meant for me, I thought, “Nothing of vibration and spirit is ever really lost, only from our mortal perspective. These chords/threads are always, in the present moment, informing the way we understand and cherish Life.”

Then I wrote a poem:

Today is all we have –
Cherish its offerings:
witnessing with a dying friend,
wet toddler kisses,
a shared repast.

Patterns that captivate,
open, and
lead us, eventually,
to grasp

the meaning of Love.

A few minutes later, I came across a video of my friend Travis reading the Wm. Stafford poem “The Way It Is.” As so often happens with meaningful coincidence, the Stafford poem pulled all the threads of Lost Chord together for me:

The Way It Is

“There’s a thread you follow. It goes among
things that change. But it doesn’t change.
People wonder about what you are pursuing.
You have to explain about the thread.
But it is hard for others to see.
While you hold it you can’t get lost.
Tragedies happen; people get hurt
or die; and you suffer and get old.
Nothing you do can stop time’s unfolding.
You don’t ever let go of the thread.”

3 thoughts on “Finding the “Lost Chord””

Thoughts on Writing, Art, and Life